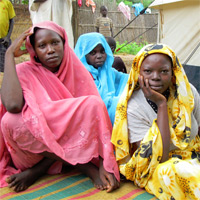 The names of some of the refugees interviewed have been changed to protect their identities.

SHERKOLE REFUGEE CAMP, Ethiopia – Sudanese government forces and militias are killing and raping civilians in Blue Nile state, according to refugees who recently fled the fighting. These alarming new details about how the war in Blue Nile is being conducted emerged from an Enough Project trip to the Ethiopian border—where nearly 29,000 Sudanese refugees have sought safety—and underscore the need for further investigation and international access into the area.

At 2 p.m. in the Ethiopian border town of Kurmuk the explosion of a bomb rang out as it was dropped from a plane in nearby Sudan. Kurmuk, Ethiopia sits a mere 500 meters across the border from Kurmuk, Sudan—a stronghold for the rebel SPLM-North. Aerial bombardments had been ongoing since the early morning, followed by shellings in the afternoon, according to a group of refugees. The refugees were the latest influx of Blue Nile residents that had crossed the border, some waiting to be transported to one of two refugee camps deeper into Ethiopia. Within the next hour while Enough visited the area, two more bombs exploded.

In early September the Sudanese government initiated its third conflict along the South Sudan-Sudan border in the state of Blue Nile. Even more so than in neighboring South Kordofan, few independent observers have been allowed access into the war zone. Reports on the situation have primarily come from parties to the conflict, which cannot be independently verified and lack detail on the civilian impact of the violence.

In more than a dozen interviews with the Enough Project in late October, Blue Nile refugees in Sherkole camp and Kurmuk, Ethiopia recounted their experiences when violence broke out and offered their understanding of why conflict has resumed in an area that has seen peace since the signing of the Comprehensive Peace Agreement, or CPA, in 2005. The stories of several of these individuals will be shared in a series of blog posts on the Enough website in the coming weeks. But first, an overview.

Air Raids Begin, Civilians Targeted: ‘It’s all because we are black’

Refugees who fled fighting in the towns of Kurmuk, Wad el-Mahi, Um Darfa, Dindiro, and Damazine have near identical accounts of how the conflict began. In each town, fighting first broke out between Sudan Armed Forces, or SAF, and Sudan People’s Liberation Army, or SPLA, soldiers in the former Joint Integrated Units, or JIUs, between the late hours of September 1 into the morning of the next day. Aerial bombardments and shellings by the Sudanese government accompanied the ground combat.

Separate accounts of government bombings in Kurmuk suggest that civilian areas were targeted. “The reason the civilians started running was because of the Antonovs,” said Boles, a resident of Kurmuk, Sudan. The bombs were “targeting the civilian areas” of the town, not where the fighting between the SPLA-N and SAF was taking place. “The SAF did not want to hit their own,” he said.

“Soldiers with small arms were chasing the civilians. They were supported by the Fellata [an ethnic group in Blue Nile], who captured some of the civilians and slaughtered people,” said Asma, who witnessed the outbreak of conflict in the town of Um Darfa. She said the militias and government forces did not spare children and pregnant women. “It’s all because we are black,” she said.

When asked whether the militias or soldiers said anything to the civilians in their pursuit, Asma said the militias were shouting directions at each other, saying, “Grab the slaves.”

Her account was corroborated by Kasmero who, when fleeing from the state capital of Damazine, ran through Um Darfa when fighting began. He said after the SAF attacked the town with helicopter gunships and Antonovs, the “janjaweed” and Fellata began to indiscriminately kill civilians. “I saw bodies all the way from Damazine to Ethiopia,” he said. “There is no discrimination, the common theme is you are black.” Two towns he passed while fleeing, Ardaiba and Kambelle, were also burned to the ground, Kasmero said.

Aziz, who fled from Baw town, told Enough that government militias—who were sent to bring back those who had fled to the mountains nearby—kidnapped and detained some of the displaced women and young girls in a school. “At night they had visitors and they did whatever they wanted with them,” he said, referring to SAF soldiers and government militias. Two young girls were killed as a result of being raped by around 30 men, said Ali, who also fled from Baw and spoke to Enough with Aziz.

Before, A Tenuous Peace: ‘We had high hopes’

Most Blue Nile residents expressed surprise that war had returned to their state. “We were living in peace,” was a common refrain, whether to describe relations with neighboring ethnic groups or relations between the SPLA and SAF former JIUs. “It was a surprise. We are civilians. The government does what it wants to do,” said Thaura, a woman from Kurmuk.

“If the government is serious about peace, the civilians will come back and live in peace again,” said Adam, also from Kurmuk.

Others pointed to a build-up of political tensions prior to the outbreak of conflict and described what they saw as the economic and political marginalization of Blue Nile and its population by Khartoum, including through the manipulation of the popular consultation process. The popular consultations—a process established under the CPA to give residents of Blue Nile a chance to assess whether the political and economic relationship between the state and the central government established were satisfactory—were never completed.

“We had high hopes after the CPA [was signed] that there would be peace and development. When the governor from the SPLA took over, the flow of money from the central government stopped, and the high hopes of the people were dashed,” said Osman of Baw. Major roads, such as those connecting Damazine to Kurmuk and Geissan, were never completed, he said.

Some refugees said that the results of the popular consultations were leaning toward greater autonomy for the region, suggesting that this trend in part spurred the recent offensive. “The government feared this result,” and took steps to co-opt the exercise, said Osman’s friend, Ibrahim. He said he wanted the popular consultations to lead to more autonomy, “so that we can govern ourselves,” and so that state resources would be used for the development of the state.

‘We have to defend ourselves and get what is ours’

When asked how the conflict could come to an end, many refugees said that the decision was, from the start, out of their hands. Unanimously, the refugees Enough spoke to understood the conflict as provoked and fueled solely by Khartoum. As such, many said that fighting back was necessary.

“[The government] attacked their own people, if we were not attacked, perhaps we would be at home right now. That was wrong. We have to defend ourselves and get what is ours,” said Asma of Um Durafa.

“We want peace but the way that this thing developed, it will be difficult,” said Adam, from Kurmuk. “It was the SAF who came to attack the SPLA, so they have to defend themselves,” he said, adding that a third party such as another country or the United Nations would have to intervene to stop the fighting. “We are civilians. We are like children in a family, you don’t make decisions.”

“I wish that the government would be reasonable and will handle the situation better than this,” said Yusaf, who spoke to Enough in a group with Osman and Ibrahim. “But the government is insisting on a military solution.” As such, Yusaf explained, his view on how the conflict can be resolved has hardened as well, shifting from a peaceful resolution to regime change.

On the Run, Once Again

Many of the refugees Enough spoke to were not experiencing the trauma of war for the first time; many ran when the 1983 civil war broke out, others ran as a result of the conflict in Darfur. Some were returning to Sherkole for the second time.

“My husband is not here, I’m focusing on raising five kids by myself, with no job or salary. That is where my focus is. But if I tell you what’s in my heart, it will be a long story,” said Miriam, who
had only just left Sherkole in 2010 to return a year later. “Even though [this place] looks familiar, but it is still difficult for me.”

“I’ve ran so many times with a child or two on my back,” said Zahara, who fled Darfur in 2003 and had settled in Blue Nile for eight years before conflict forced her to run again.

Sherkole camp, where refugees can be found from Abyei, the Nuba Mountains, Darfur, Blue Nile, and South Sudan, serves as a microcosm of Sudan’s long and continuous history of conflicts. “It is the same story. We might have individual stories, but at the end it is for the same reason that we were all scattered,” Mohamed, a Darfur refugee, observed.

“The same war” prompted us to flee, said Musa, who fled violence in both Darfur and Blue Nile. “We are the blacks, from eastern Sudan to Kassala, through Blue Nile, Nuba Mountains and Darfur, all the way to Chad. We are the owners of this country and we have been mistreated. So my question is, is anybody going to protect us?”

Get the flash player here: http://www.adobe.com/flashplayer