War has been hell for South Sudan’s people, but it has been very lucrative for the country’s leaders and commercial collaborators, South Sudan’s war profiteers. South Sudan has been torn apart by three wars in the last 60 years. Two and a half to three million people have perished as a result of these wars. This legacy has finally caught up to the world’s newest country, as the United Nations declared a full-blown famine in February 2017, a rare declaration that the U.N. hadn’t made for any part of the world since 2011, and multiple U.N. officials have asserted that South Sudan stands on the brink of genocide. 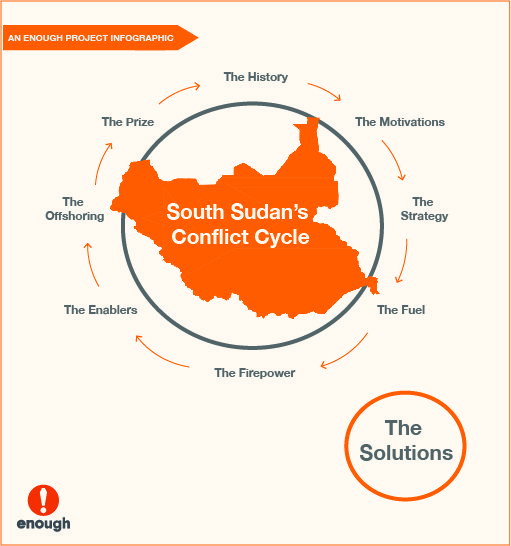 As the former U.S. Ambassador to the U.N. said in one of her last addresses to the Security Council, “The people within the UN system whose job it is to sound the alarm have sounded it. History is going to show what each of us did, where each of us stood, when the sirens were blaring…”

The patterns of governance and causes of conflict in South Sudan today have not really changed much since Sudan’s independence in 1956, at which time South Sudan was still part of the larger nation of Sudan, as South Sudan only became its own independent state in 2011. The history of conflict and mass atrocities in Sudan and South Sudan is driven in large part by unchecked greed, manifesting itself primarily in the accumulation of wealth and power by the country’s leaders. Ethnicity has been used as the main mobilizer for organized violence, which has resulted in genocidal violence in Darfur and the Nuba Mountains in Sudan, and in parts of South Sudan even during the North-South War. The ultimate prize is control of a kleptocratic, winner-take-all state with institutions that have been hijacked by government officials and their commercial collaborators for the purposes of self-enrichment and brutal repression of dissent.

Corruption isn’t an anomaly within the system; it is the system itself, the very purpose of the state.

In 2013, the two main competing kleptocratic factions of South Sudan’s ruling Sudan People’s Liberation Movement (SPLM) that had unified for the purposes of securing the independence of the country in 2011 had another falling-out, plunging the country back into war, mass hunger, and the brink of state collapse. There has been total impunity for the resource theft, child soldier recruitment, abductions, mass rape, bombing of civilian targets, and the obstruction of humanitarian aid.