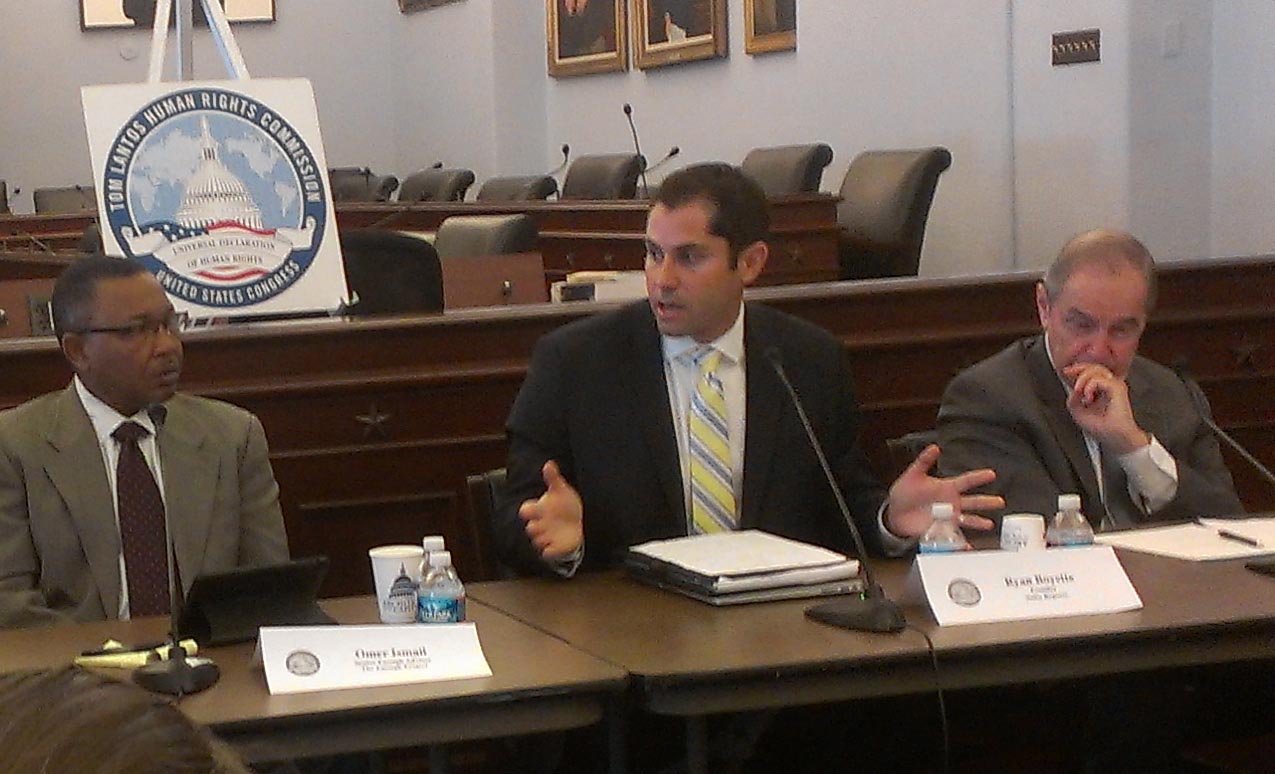 On May 20, Enough Project Senior Advisor Omer Ismail presented at a briefing on human rights and the escalation of violence in Sudan. The briefing was hosted by the Tom Lantos Human Rights Commission, a bipartisan caucus established in the U.S. House of Representatives to promote, defend, and advocate internationally recognized human rights norms in a nonpartisan manner, both within and outside of Congress. Capitol Hill staffers, activists, and Co-Chairs of the Commission Congressmen Frank Wolf (R-VA) and James McGovern (D-MA) attended the briefing.

The briefing was called in response to the ongoing and escalating violence in Sudan’s Darfur, Blue Nile, and Nuba Mountain regions, as well as violent crackdowns on student protests and arbitrary arrests and detention of human rights activists in the capital city of Khartoum. Other panelists included Ambassador Princeton Lyman, U.S. Special Envoy for Sudan and South Sudan (2011-2013) and Advisor to the President at the United States Institute of Peace and Ryan Boyette, Founder of Nuba Reports. The briefing was moderated by Lauren Ploch Blanchard, Specialist in African Affairs at the Congressional Research Service.

Ryan Boyette is a citizen journalist and former humanitarian aid worker living and working in the Nuba Mountains in Sudan’s South Kordofan state. He and his team track aerial bombardment and other attacks by the Sudanese government on civilian targets and report such attacks to NGOs, advocacy groups, and media both internationally and within Sudan. In his briefing, Boyette discussed new trends in the Sudanese government force’s efforts in South Kordofan, including the use of a newly trained "Rapid Response Force" and more artillery, which has enabled military forces to take areas over more quickly. He discussed the devastating impact this is having on civilian populations who were unprepared for such rapid displacement. He also mentioned that the recent violence and displacement in South Sudan has cut off traditional trade and aid delivery routes and will contribute to increased food insecurity in the coming months if not addressed.

Omer Ismail emphasized that the violence has not only continued since 2003, but that it is now taking new shapes in Darfur where half a million people were displaced in 2013 and that trend has continued into 2014. He expanded upon Boyette’s mention of the new rapid response forces and the Sudanese government’s use of these troops throughout the country- including in Darfur and around Khartoum. He contended that, with the Janjaweed now incorporated into the Sudanese army’s rapid response force, the government can no longer claim a lack of association with or responsibility for the militia group. In response to Congressman McGovern’s question about what the U.S. government can be doing right now, Ismail laid out a series steps that could be taken, which included:

Ambassador Princeton Lyman focused on problems central to the government in Khartoum and the need for increased engagement from the wider international community on issues within Sudan. He discussed the need for a more cohesive strategy across the various mandates operating within the country, including the AUHIP, UNAMID, and the UN Envoy’s office. While the UNAMID mandate is currently under review, Lyman expressed the need for improvements to the troops deployed to the mission, as well as increased support for humanitarian aid and civilian protection. He encouraged the international community, especially African Union and Arab League countries, to help the Sudanese government realize that their current tactics and way of governing are unsustainable in the long term. Lyman acknowledged that democratic transformation in Sudan will be difficult, but encouraged the community of policy makers to think more about how the U.S. government can support democratic political movement in Sudan.

Watch the video of the full hearing.