Activists Take to Washington D.C. for the 2018 Lemkin Summit

Activists Take to Washington D.C. for the 2018 Lemkin Summit

Posted by Marissa Sandgren on February 28, 2018 The 2018 Lemkin Summit to End Genocide and Mass Atrocities brought together 160 activists and student leaders in the anti-atrocity movement for our largest summit to date. Hosted at American University, the 3-day Summit featured expert panels, activist skill training, and focused breakout sessions. Co-sponsored by the Enough Project and Jewish World Watch, participants networked with one another, engaged with guest speakers and learned new approaches to end and preventing mass atrocities in places such as the Central African Republic, the Democratic Republic of Congo, South Sudan and Sudan. The Summit culminated with more than 75 meetings with congressional offices.

The Summit opened with special remarks from Nancy Ehrlich, who in 1958 befriended Dr. Raphael Lemkin in a New York park. She spoke about prejudice as a precursor to genocide and what a gathering of activists in his honor would have meant to him.

Throughout Saturday participants heard from several key presenters, including Nicole Widdersheim the Director of African Affairs at the National Security Council, who provided a stirring and passionate presentation of her history of work in Darfur.  Congolese activist Neema Namadamu who founded the Maman Shujaa Media Center and was featured in the film Merci Congo joined Bridget Moix from Peace Direct and Enough’s Omer Ismail to discuss civil society’s role in creating change. Saturday’s dinner was held in honor of Darfuri activist and poet Emi Mahmoud and her “One Girl Walk for Peace” across Sudan to encourage civilian peace talks. The dinner programming featured a call to action for participants to express their own dreams for peace. The evening closed with a celebration of art and activism featuring three powerful performers.  Dr. Omekongo Dibinga set the stage with several impactful and provocative poems about intersectionality in activism with demands for change in portraying mass atrocity in the media to breaking down stereotypes of Africa. He was followed by South Sudanese singer, Ruth Mathiang, and Nigerian guitarist, Emmanuel Oke.

Sunday’s program included an address from Ambassador Liberata Mulamula, the current Acting Director for the Institute for African Studies at George Washington University and former Tanzanian Ambassador to the United States. The Ambassador spoke about women’s leadership and empowerment in Africa.  There were also several breakout conversations on topics such as tracing illicit financial networks, exploring the role of genocide in the media, digital advocacy for successful campaigns, and on the ground responses to mass atrocity. Participants additionally spent time receiving advocacy and policy trainings to equip them for their meetings with Congressional offices on Monday.

The final day of the Summit was an advocacy day on Capitol Hill where activists urged Senate offices to introduce DRC legislation aimed at pressuring the Kabila regime to allow for a true democratic transformation transition and respect for basic human rights and ask House offices to sign onto a Sudan letter to Secretary of State Tillerson outlining the contours of what the next phases of U.S. policy towards Sudan should look like.

Click through the slideshow below to see more photos from the 2018 Lemkin Summit! 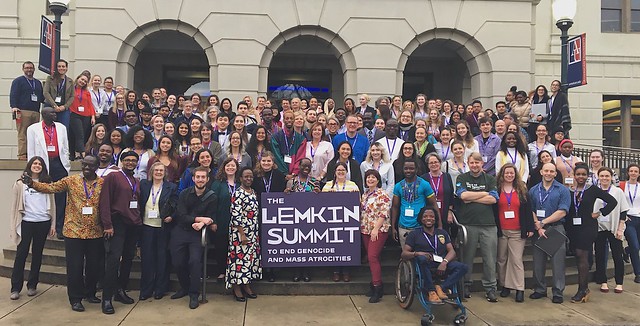